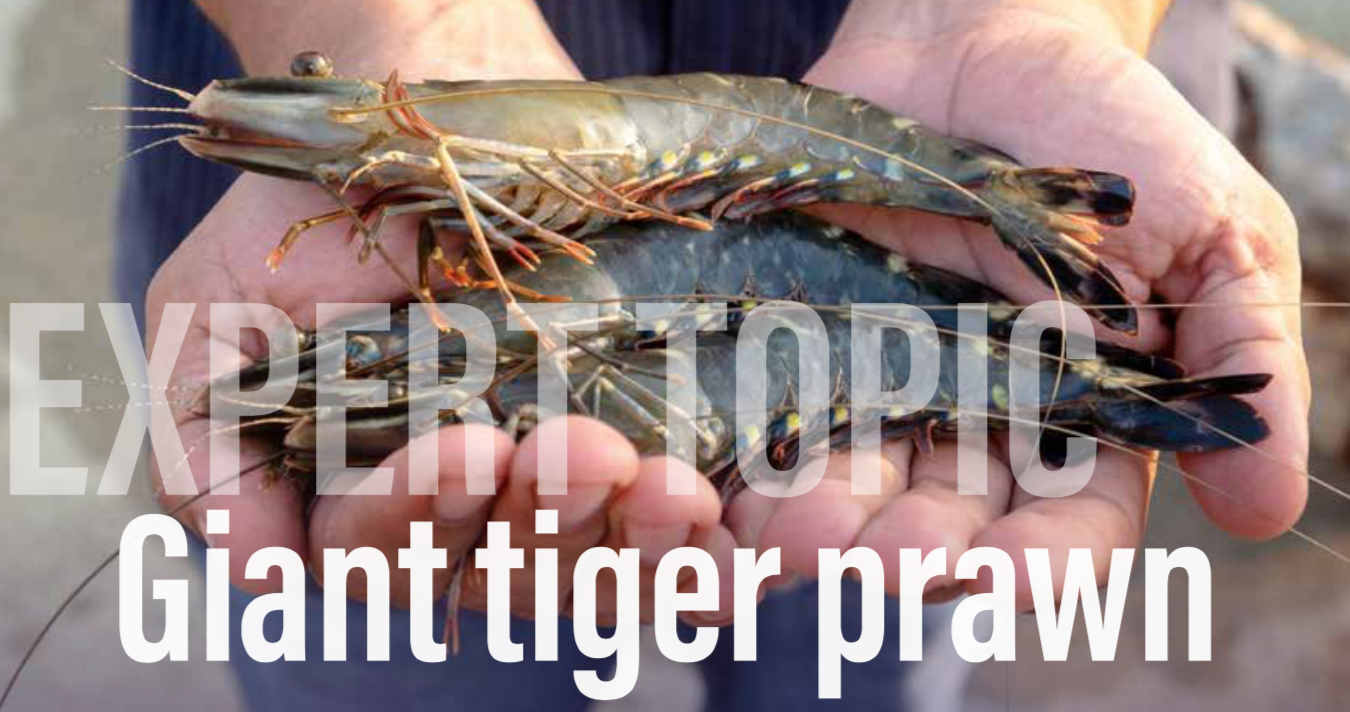 The Giant tiger prawn (Penaeus monodon) is a prominent crustacean within the aquaculture industry, farmed in large numbers that are second only to the Whiteleg shrimp (Litopenaeus vannamei). One reason for the Giant tiger prawn’s widespread popularity is their adaptability and ease of farming. This particular shrimp can flourish in a wide range of salinities between 3-35ppt, although their optimal levels are between 15-25ppt and temperatures of between 28-33°C. Giant tiger prawns can be found across the globe, ranging from Southeastern Asia, the Pacific Ocean, Northern Australia and the Arabian Peninsula.

Giant tiger prawns feed upon small crustaceans, molluscs and polychaete worms. Many wild subspecies of tiger prawns are nocturnal, emerging from the substrate under cover of darkness to search for food or to mate. Larvae will hatch offshore, before entering estuaries and swamps that serve as nursery grounds. Juvenile Giant tiger prawn will move into deeper waters upon maturation.

Commercial farming of Giant tiger prawns began in the late 1980s and has seen a gradual increase with only slight fluctuations in farming numbers throughout the years. In 1990, 289,799 tonnes (t) of Giant tiger prawns were farmed for aquaculture globally, which increased to 630,984t in 2000 and 701,081t in 2016.

In order for farmers to achieve optimal yield in their harvests, much research has been conducted to discover nutrients that best promote shrimp growth. Giant tiger prawns are typically farmed in ponds, wherein their natural diet of copepods and polychaetes can be supplemented with pelleted feeds to achieve a nutritionally balanced diet. In a study conducted by Tacon in 2002, an estimated 75-80 percent of all farmed shrimp are fed with industrially compounded aquafeeds.

The most efficient feed for Giant tiger prawns must be rich in 10 essential amino acids; methionine, histidine, tryptophan, isoleucine, arginine, valine, threonine, lysine and phenylalanine. Of these ten, methionine, arginine and lysine can prove expensive to make readily available, which is where cystine can prove useful as an alternative to methionine and tyrosine as a partial substitute for phenylalanine.

Fatty acids are also vital for the growth of Giant tiger prawns. Four specific fatty acids are deemed vital for the species; docosahexaenoic, linolenic, eicosapentaenoic and linoleic acids. In a 1976 study by Guary et al, it was demonstrated that Giant tiger prawns will exhibit improved growth rates when fed lipids from marine sources, rather than from vegetable oil. Other fatty acids such as arachidonic acid do not necessarily promote optimised growth, but have been deemed advantageous in ensuring proper maturation.

Soybeans have become a popular ingredient within shrimp feed as a source of phospholipids. Lecithin has been proven to be an effective growth-promoter in shrimp, which soybeans provide in abundance as well as also providing inositol and choline into their diets.

The most expensive ingredient in shrimp feed is, in most cases, cholesterol. As shrimp cannot synthesise sterols, they are an essential ingredient in their diets. A 2004 study by Castille etc al suggested that shrimp dietary requirements for cholesterol is a minimum of 0.15 percent. In order for shrimp feed to retain optimal water stability and binding capacity, pellets should aim to contain no more than four percent crude fibre.

In hatcheries, small indoor concrete tanks are used for larval rearing. Nauplii are stocked at around 100,000-per-tonne and cultured up to the late mysis stage. At this point, they are then transferred to new talks and cultured up to post larvae (PL) 12-15. At this point, formulated feeds can be added to complement existing diets. Upon maturation the shrimp enter intensive, semi-intensive or extensive ponds.

Ensuring rearing ponds are in optimal condition is key to good shrimp farming. Pond preparation must be carried out regularly in order to enhance shrimp health and ensure a bountiful harvest.

A 2006 study by Suresh, Aceituno and Oliva noted the following as vital steps in pond preparation when farming Giant tiger prawns:

Between each culture cycle, ponds should be dried for 7-14 days. Oxidation of black sludge will be evident as the sediment shifts from black to brown. In areas where the pond cannot be adequately dried, chlorine compounds can be used to ensure disinfection. Tilling (pulverising the soil to expose wastes to both sunlight and air) and liming (the regulation of soil pH) will also be carried out at this stage.

Pond filling and fertilisation take place simultaneously. In this process, mesh filters are used to eliminate pathogens. Chlorine is applied at concentrations of between 3-30mg/litre to eliminate Vibrio spp. Following this, a paddle wheel will oxygenate the water and the pond is left to settle for an average of five days. Fertilisers will be used to achieve plentiful levels of phyto- and zooplankton to supplement PL diets.

Extensive farming, commonly carried out in India, Bangladesh, Indonesia and the Philippines, is carried out in areas where water pumping is unnecessary due to the natural tidal flow. Shrimp are harvested after a minimum of six months. This farming technique is gradually being substituted with semi-intensive farming in order to improve yield.

Semi-intensive giant tiger prawn farming takes place in ponds of between one-to-five hectares (ha) at the rate of 5-20PL/m2. Water exchange is again conducted through the tidal flow and supported occasionally by pumping. Production yield ranges between 500-4000kg/ha/year.

The most popular method of shrimp farming is intensive farming, which occurs in non-tidal areas such as Thailand and Malaysia. Smaller ponds (ranging between 0.1-1.0ha) stock at between 20-60PL/m2. PL are fed four-to-five times a day and the final feed conversion rate (FCR) is between 1.2:1 and 2.0:1. A standard yield from intensive shrimp farming ranges between 4000-15,000kg/ha/year.