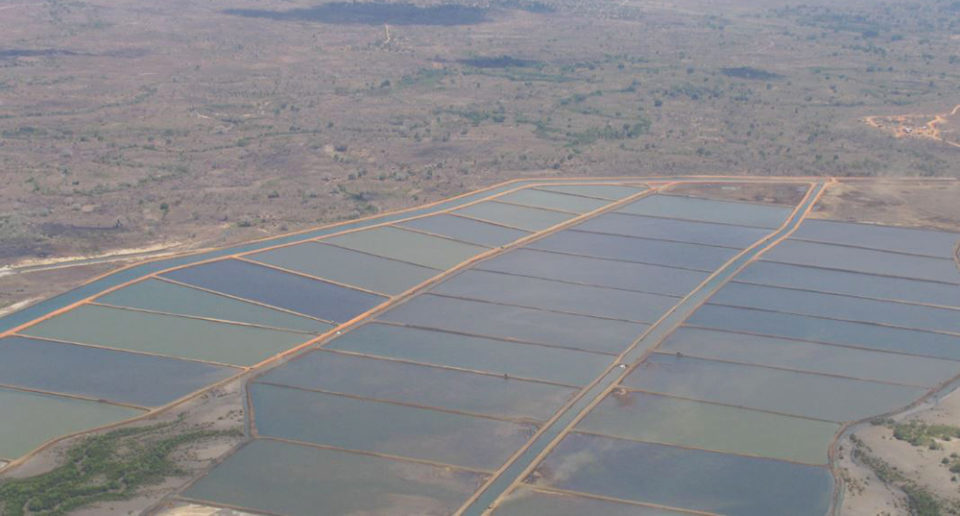 Professor Boyd: Algae has an important relationship with aquaculture ponds

Many important roles in aquaculture ponds

Mechanical aeration increases the rate of loss of oxygen from ponds when the water is supersaturated with this gas. Aeration often can be stopped during daytime in fish ponds and reduced in shrimp ponds during daytime to lessen the amount of oxygen lost from the water. Shrimp live on the bottom, and some aeration should be applied during the day to assure movement of oxygenated water across the bottom. At night, mechanical aeration lessens the decline in dissolved oxygen concentration.

Bicarbonate is the main source of alkalinity in most ponds. Nevertheless, total alkalinity does not decrease in pond water when phytoplankton use bicarbonate in photosynthesis. This is because the contribution to alkalinity concentration of one carbonate ion is equal to that of two bicarbonate ions.

Alkalinity tends to buffer water against pH change, and in low alkalinity waters – especially those with alkalinity below 20 mg/L – pH may rise to stressful or lethal levels for aquaculture species. Liming to increase total alkalinity above 40 to 50 mg/L is advisable in aquaculture ponds.

The increase in pH caused by photosynthesis also is of significance with respect to the un-ionized ammonia concentration. Ammonia nitrogen is present in water in the forms of ammonium ion (NH4+) and un-ionized ammonia (NH3) in a pH- and temperature-dependent equilibrium:

The proportion of the total ammonia nitrogen in NH3 form are shown in Table 1 for different temperatures and pHs. 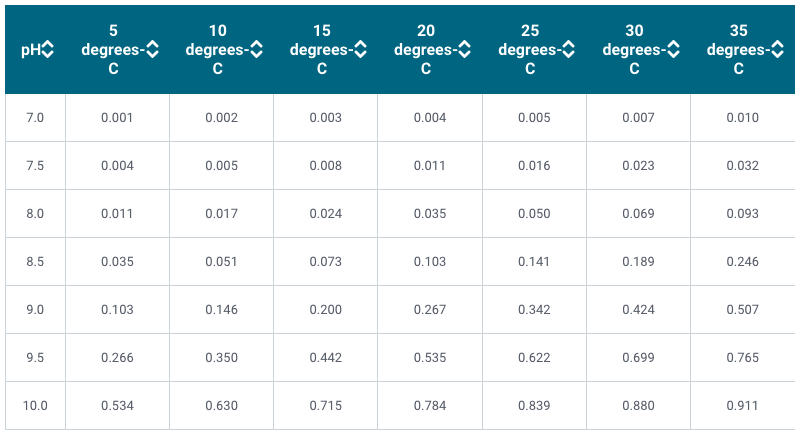 Decimal fractions of total ammonia-nitrogen existing as un-ionized ammonia-nitrogen at various pH values and water temperatures. Values were calculated using the “ammonia calculator” at http://fisheries.org/hatchery for a typical, dilute fresh water with a total dissolved solids concentration of 250 mg/L.

Non-ionized ammonia is potentially toxic to aquatic animals at relatively low concentration. In the afternoon, when pH rises, the concentration of NH3 increases. A recent study in channel catfish ponds in Alabama revealed that at a total ammonia nitrogen concentration above 1 mg/L, afternoon concentrations of NH3 often were as high as those reported to stress fish in laboratory studies. There usually is little likelihood of acute mortality as a result of high NH3 concentration in most aquaculture ponds. Nevertheless, stress from high NH3 concentration lessens the appetite of culture species and also can predispose them to disease. 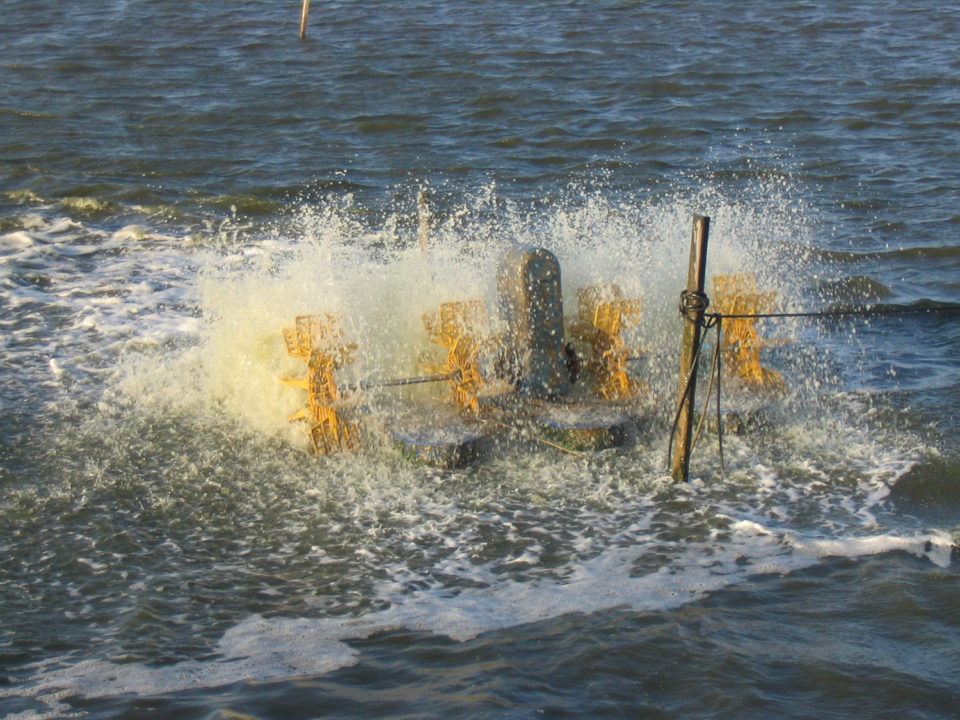 Mechanical aeration increases the rate of loss of oxygen from ponds when the water is supersaturated with this gas, and it can also be used to prevent and manage dissolved oxygen levels. Photo by Darryl Jory.

Mechanical aeration can be used to prevent low concentrations of dissolved oxygen. However, overabundant phytoplankton in aerated ponds can cause unacceptably large increases in pH and associated increases in NH3 concentration. Elevated pH in ponds also favors the growth of blue-green algae (called cyanobacteria by many biologists), because these organisms tend to grow better than other kinds of algae at a high pH. Aquaculture ponds often have phytoplankton communities in which one or a few species of blue-green algae make up 90 percent or more of the algal community.

Some species of blue-green algae – especially species of Anabaena and Oscillatoria – can excrete odorous compounds into the water that may be adsorbed by shrimp and fish to impart a bad taste (off-flavor) to their flesh. Some blue-green algae – especially Oscillatoria, Microcystis, and Aphanizomenon – can produce algal toxins that can stress or kill the culture species.

Blue-green algae also may rise to the surface by virtue of vacuoles in their cells that can fill with gas when high algal abundance limits light penetration into the water. Near the surface, high rates of photosynthesis may cause the pH to increase enough to cause mortality to the algae. This phenomenon often is called a phytoplankton die-off. Such events may cause dissolved oxygen concentration to fall to unacceptable levels in ponds without mechanical aeration. The likelihood of phytoplankton die-off is minimized in aerated ponds because water circulation tends to minimize the occurrence of surface algal scums, and oxygenation by aerators prevent low dissolved oxygen concentration following die-offs. 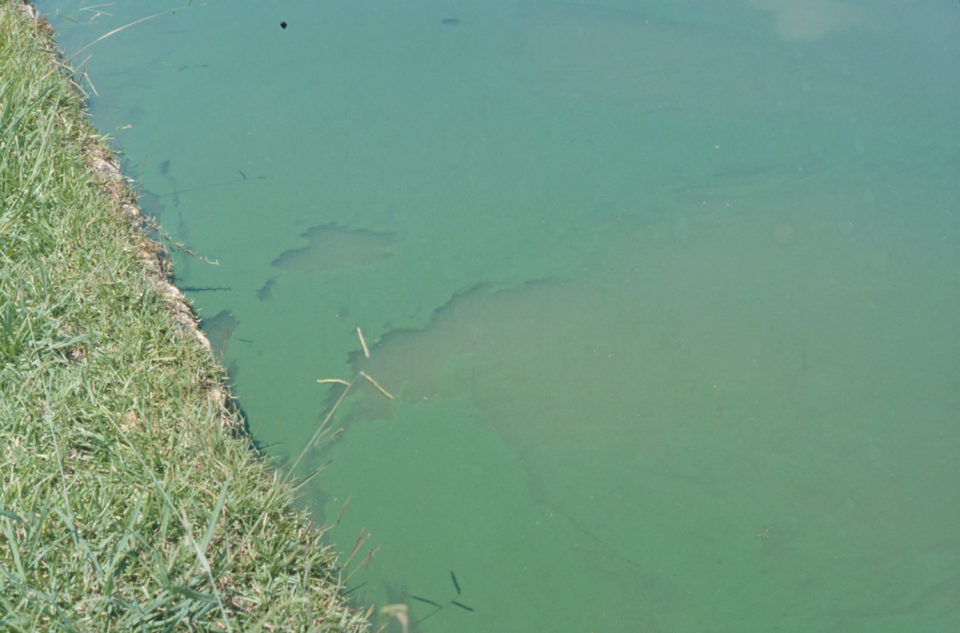 Blue-green algae will often float to the pond surface and form scums that absorb heat and can elevate water temperatures.

There is no effective means of preventing a high abundance of phytoplankton in ponds that receive large inputs of nutrients. At feeding rates above about 30 kg/ha/day, nighttime dissolved oxygen depletion often will become a limiting factor – higher daily feeding rates are possible in un-aerated ponds for tilapia and a few other species. With mechanical aeration, much higher feeding rates may be used, but it is critical to match aeration rate with feeding rate for most warmwater species to avoid dissolved oxygen below 3 or 4 mg/L. Unless this is done, the producer has more fish in the pond, but water quality will be suboptimal and stress the animals.

Mechanical aeration will not avoid high pH, elevated carbon dioxide concentration in the morning, high NH3 concentration in the afternoon, or the occurrence of blue-green algae responsible for off-flavor and algal toxins. Ponds with low alkalinity can be limed to minimize daily swings in pH, but even so, the pH may reach undesirably high levels in the afternoon, if phytoplankton is abundant.

In summary, the abundance of phytoplankton, and of blue-green algae in particular, tends to increase as nutrient inputs in fertilizers or feeds increase. Mechanical aeration can avoid problems with low dissolved oxygen. But, there is no practical way of avoiding most other adverse effects of excessive phytoplankton abundance. This fact imposes a limit on the amount of production possible in aquaculture ponds. It is important to limit feed inputs (and production) to amounts at which water quality variables will not experience frequent excursions to levels stressful or toxic to the culture species.