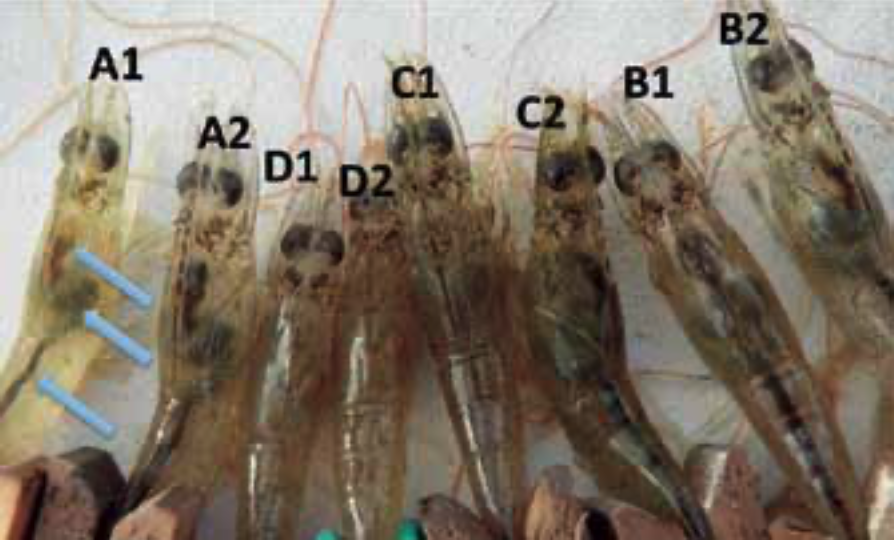 Anecdotal reports have indicated polyculture and bio- floc systems can reduce outbreaks of diseases at shrimp farms. A laboratory study at the University of Arizona examined the effects of tilapia in controlling acute hepatopancreatic necrosis (AHPN) infection and mortality in Pacific white shrimp. Results suggested that practices such as using tilapia in the reservoirs of shrimp farms

to induce beneficial algal and bacterial blooms in water prior to filling ponds could promote healthy, balanced biota communities that confer beneficial effects
in controlling AHPN.

Several anecdotal reports have indicated that some antibiotic- free approaches such as polyculture and biofloc systems can reduce the risks of disease outbreaks at shrimp farms. Polyculture with tilapia has been known to confer some beneficial effects in controlling luminescent bacteria, Vibrio harveyi, affecting shrimp. Since V. parahaemolyticus, a virulent strain of which causes early mortality syndrome (EMS), is closely related to V. harveyi, polyculture of tilapia with shrimp may confer similar effects against this bacterial species.

Farm trials conducted in areas of Vietnam where EMS or acute hepatopancreatic necrosis (AHPN) is endemic have shown better survivability of shrimp grown in polyculture systems. However, lab experiments with controlled environments and standardized challenge models were needed to determine the effectiveness of this approach.

A laboratory study was conducted at the University of Arizona to determine the effects of tilapia in controlling infection and mortality in Pacific white shrimp, Litopenaeus vannamei, due to a pathogenic Vibrio parahaemolyticus strain. Five treatments with three replicates each were used.

Treatment A was a negative control with culture tanks prepared without tilapia for 14 days prior to stocking with shrimp. For treatment B, tanks held Oreochromis niloticus tilapia for 14 days, after which the tilapia were removed prior to stocking of the shrimp. A 10-day AHPN challenge test followed after the addition of a bacterial suspension containing virulent V. parahaemolyticus that achieved a bacterial density of 3.105 cells/mL tank water.

After 14 days of tank preparations to induce algal blooms and establish balanced biotic communities mimicking field practices in shrimp farming, bacterial counts revealed the bacterial density was not significantly different among treatments A, B, C and D. However, their counts were 3 logs higher than for the positive control.

Ten days after the addition of the bacterial suspensions in the challenge tests, survival rates were significantly different among treatments (Figure 1). The survival rates for treatments A, B, C, D and E were 97.78%, 91.11%, 6.67%, 20.00% and 0%, respectively. The high survival rate in treatment A indicated the experimental conditions were suitable for the survivability of shrimp. Meanwhile, the zero survival in the positive control showed the high pathogenicity of the bacterial strain used in the study. 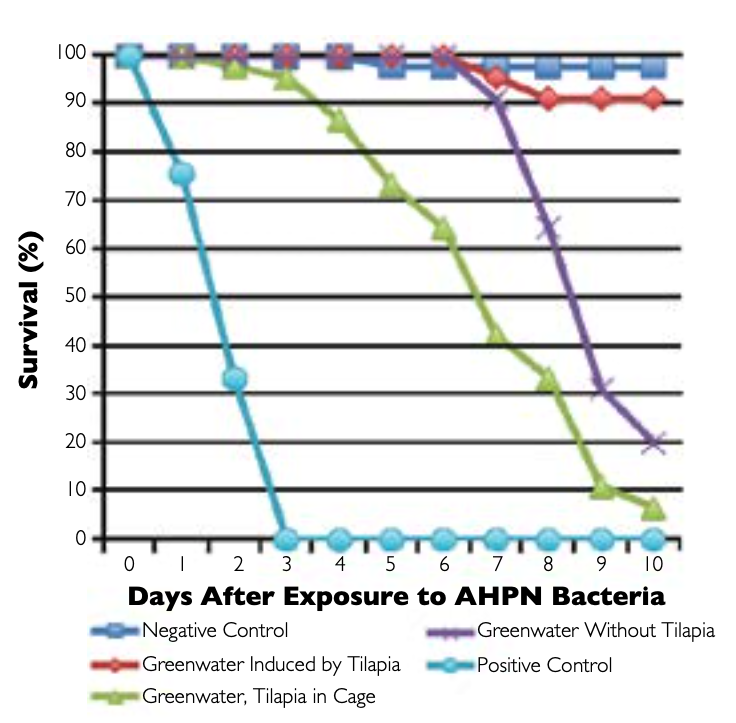 Although the AHPN bacteria were later isolated from the water and shrimp in all the challenged treatments, histological analyses showed that the infection rates and severities of the pathologies in different treatments corresponded to the survival rates. The bacteria counts in water samples showed a significant drop in treatments B, C and D compared to the bacterial density added by the challenged test. In contrast, bacterial density in the positive control using clear saline water showed a marked bloom of AHPN bacteria. This indicated that the native biota communities in water can interact with the AHPN bacteria and the infection caused by this strain.

The study suggested that the application of practices such as using tilapia in the reservoirs of shrimp farms to induce healthy algal and beneficial bacterial blooms in water prior to filling ponds could promote healthy, balanced biota communities in the pond water that could confer beneficial effects in controlling AHPN.

Vibriosis diseases induced by luminescent bacteria have caused serious problems in shrimp farming. Some farming prac- tices that took advantage of “greenwater” technology in which the green water was induced by tilapia could mitigate the luminescent vibriosis caused by Vibrio harveyi in Penaeus monodon.

This study was the first step in demonstrating that the indigenous biota induced by tilapia or by tank preparation steps could lower the number of AHPN bacteria in water, thus delaying mortalities in challenged shrimp. However, an overbloom of algae could produce unexpected effects due to eutrophication and nutrient availability from dead algae that could benefit the AHPN bacteria. In addition, without competition from the indigenous biota, the AHPN V. parahaemolyticus could replicate in water to a level that causes infection.

These findings helped explain an observation that AHPN usually affected ponds that did not have algae or in which an excessive bloom of algae occurred or recently crashed.